How to Choose a Resin Printer?

With the continuous strengthening of research input in the world in recent years, 3D printing technology, which has long been a widely known concept from a few years ago, gradually appeared as a reality. At present, some consumer printers have been widely used in many industries, and the demand for Industrial 3D Printers is also increasing.

What Are the 3D Printers Available on the Market?

FDM 3D Printer: The ABS, PLA and other silk materials are heated and melted by the heating device, and then the materials are piled up layer by layer through the extrusion head, and finally the model is formed.

SLS 3D Printer (Selective Laser Sintering) and SLM (Selective Laser Melting): using spread powder stick to tile a layer of powder materials on the surface of the modeled parts, and heated them to a temperature just below the sintering point of the powder. The control system controls the laser beam to scan on the powder according to the cross-section profile of the layer, making the temperature of the powder rise to the melting point and sintering.

SLA 3D Printer (Stereo Lithography Apparatus): A laser beam traces the first layer shape of the object on the surface of the liquid resin, and then makes the platform drop a certain distance (between 0.05 and 0.025mm). Then dip the curing layer into the liquid resin and repeat the process until the model is complete. The resin used in SLA 3D machine is Photosensitive Uv Resin, which forms a solid after laser beam irradiation. It is SLA 3D printing technology that Kings 3D printers use.

What Are the Typical Resin Printers?

LCD printing technology: The simplest understanding of it is that the light source of DLP technology is replaced by LCD screen. Because the light used to cure resin is damaging to the organic compounds in LCD screens, LCD display is also counted as a consumable, requiring frequent replacement. LCD 3D printer is the most economic resin printer, but the molding format is small, and the machine is easy to wear.

SLA technology is the first generation of light curing mainstream technology, which is the earliest commercialized rapid prototyping technology and also one of the most deeply studied and widely used rapid prototyping technology. While the SLA laser beam is in a round shape, for both DLP and LCD, because the image of each layer is digitally displayed, it is composed of numerous square pixels, resulting in a layer formed from small rectangular bricks called voxels that stack up along the Z axis. Moreover, for LCD, apart from changing the screen and the resin tank frequently, the support is more difficult for sanding, due to the bigger support in the upside down (hanging) printing process. Now comparing these three technologies and we can see the significant advantages of SLA 3D printing as the most mature technology: fast molding speed, large format, high precision, low machine loss, more extensive material selectivity and so on. 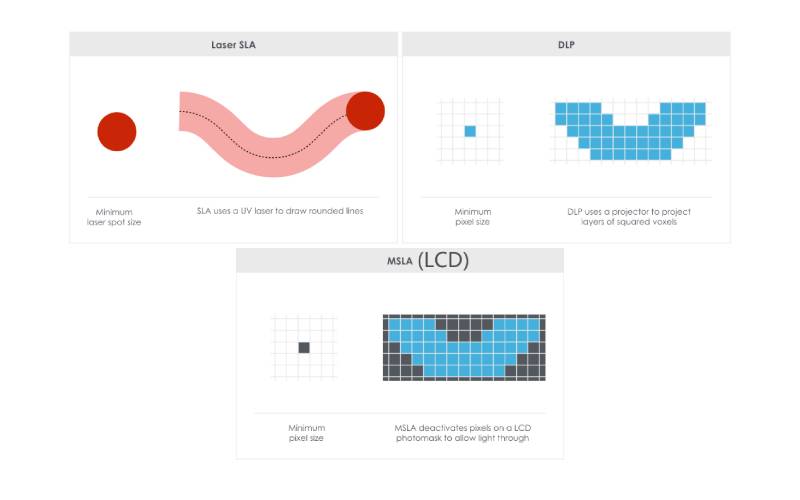 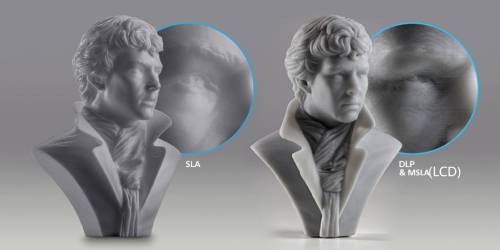 There are two types of SLA 3D printing on the market: desktop SLA 3D Printer and Industrial SLA 3D Printer. Desktop SLA 3D printers are small, portable and relatively inexpensive. But as the name suggests, the printing size is also small. For example, FormLab, probably the best known desktop 3D printer in the market, its best-selling Form 3 desktop SLA printer has a maximum molding size of 145 x 145 x 185 mm, which may be sufficient for certain small size models, but is too limited for a wider industrial use. Even Form 3L, with a much larger scale printing size of 200 x 335 x 300 mm, is still risky to failure or deform for certain large and heavy models because of upside down printing process.

Industrial SLA 3D printers are available in a variety of sizes, depending on the specific needs of the customer. There are also giant printers if needed. Taking Kings 3D as an example, its best-selling machine is Kings 600Pro, whose largest printing size is 600*600*400mm. And its largest printer is Kings 1700Pro, whose largest printing size is 1700*800*600mm. Another advantage of industrial SLA3D printers is that they are more durable and require less maintenance. With bottom-up printing method, it’s capable of printing large and heavy parts with stable quality and less support (resin waste). Desktop printer resin tank as well as the build platform needs to be replaced regularly, not only inconvenient, but also affect the performance of the printer. Their internal components are often not durable and will slowly age over time, resulting in a loss of quality and accuracy. In summary, industrial SLA printers offer advantages over desktop-grade SLA printers in all aspects except for relatively higher price. 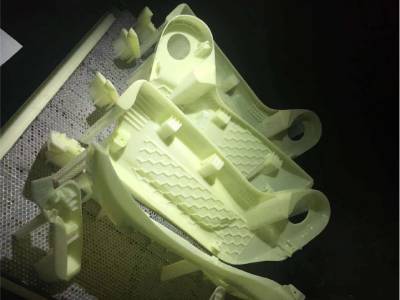 Who Should Order an Industrial Level SLA 3D Printer?

While there are all kinds of 3D printers and also multiple choices in resin 3D printer, with each kind of 3D printers appealing to certain categories of customers, who are the customers specially attracted to Industrial SLA 3D Printers? Take Kings 3D for example, customers are found from all walks of life: prototyping factory, 3D printing bureau, shoe mold factory, automobile industry, or any manufacturing companies with independent product development capabilities. These customers might also have been users for desktop resin printers or FDM printers as start-ups, but as soon as they have enough parts and budgets, without hesitation, they’ll upgrade to industrial SLA 3D printers and then find it hard to stop using it, thanks to its large printing format, high precision, fast printing efficiency, and etc.

All in all, each kind of 3D printers are complementary to each other to meet with 3D market demand and advantages of each printers can stand out at certain stage of a company. There is a huge market potential for Industrial-Grade SLA3D Printers, and there is no limit to their future growth. 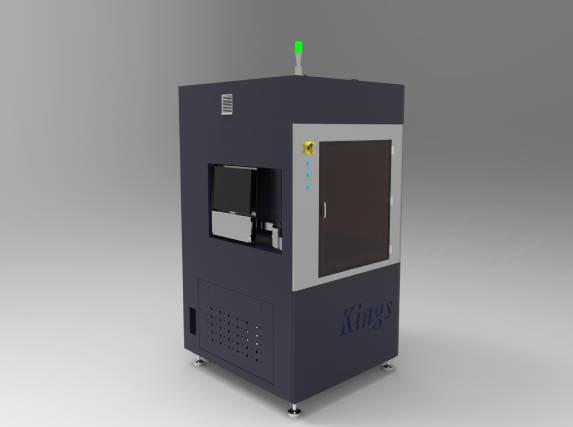 Previous:  None
Next: 3D Printing Advantages and Technical Principles